How to manage a trade construction model establishment?

As soon as you have a project in the early stage of construction, you can quickly get overloaded with models. Design and construction shop models are coming at you, wondering what graphical data does your project team coordinate against and how is the construction model development and approval managed? 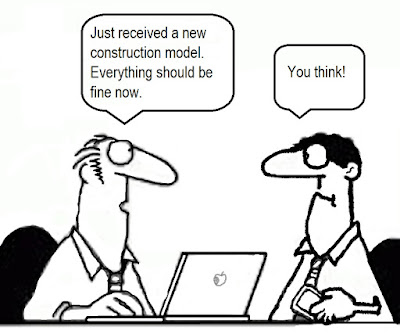 There is little on such a process in the public forum and PAS1192-2 and the Penn State BIM Execution Guide are somewhat bare around this area. Below is a proposed theoretical approach, looking at a specific specialist sub-contractor where the Design Intent model is complete before the Construction Shop Modelling has begun.

Have a look at it, pull it apart, and comment below on what you believe works and does not work. If it has legs, it shall be integrated into future release 2.0 Open BIM version of the BIMFix Model Establishment Framework. 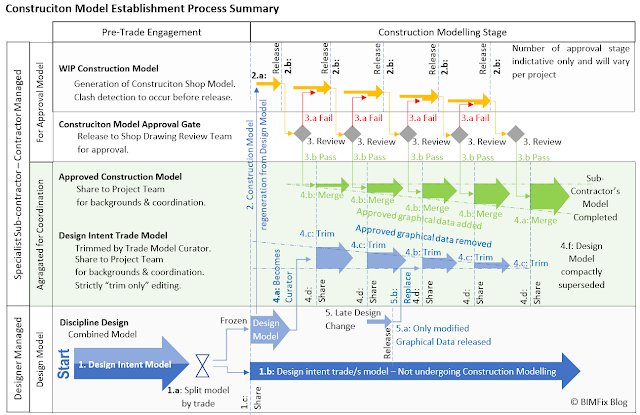 Shortly after the Main Contractor is appointed; they identify the specialist sub-contractors (trades) producing construction models and oversee the management of the below workflow. Process begins:

1. Design Consultant (Design Intent Model Originator):
1.a:  If not partitioned correctly; the design intent model/s are subdivided into distinct Design Intent Trade Models.
1.b:  Remaining graphical data (i.e. elements of trade/s not undertaking construction modeling) shall stay under the governance of the Design Consultant during the construction modeling period. As-build or As-constructed modeling is outside of this study of the process.
1.c:  Following the project appointment of the specialist sub-contractor (Trade) are appointed, the (complete) frozen Design Intent Trade Models and associated drawings/documents are published to the CDE (Common Data Environment), for the purpose of the Trade/s to begin the generation of their construction models and shop drawings.

5.  Late Design Change: If the requested design change is under the management of the Design Consultant:
5.a:  Following change approval, the new and modified geometry solely of the design change is released, (by the designer) to the Curator. The designer will provide detailed information about the scope of the design change, and ideally the element unique identifiers of the geometry to be removed from the former design intent trade model.
5.b:  The Curator, imports design change model geometry into the current Design Intent Trade Model and removes all superseded graphical data. The updated model is released to the CDE for backgrounds and coordination. 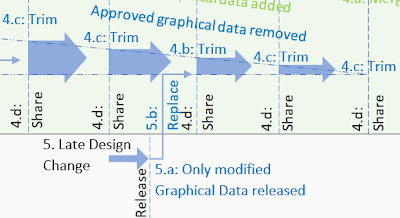 
The role of the Curator begins following the first approval of shop models. The specialist sub-contractor will take on the Design Intent Trade Model Trimming role. Role includes:

The debate goes to who is best to fit this role, and why does the Originator not do it? Here are some of the challenges on a traditional tender project:

1. The design consultant (model Originator) does not know the approval status of shop drawing elements/assemblies, other than their own return review comments. Other reviewing disciplines and the contractor's comments/approvals are often not openly available. Thus, if the Originator was to be the Curator, they would require an instruction from the sub-contractor on which elements/assemblies have received approval.

2. When the design stage is complete, the design consultant only has technical review staff on the project, and not modeling staff (due to fee breakdowns, and work scope), thus making it more difficult to trim the model. This type of task is best carried out by a proficient modeler.

3. The updated design intent trade model needs to be released to the CDE at the same time as the updated Construction model: (to avoid confusion and double modeling). Having two separate parties involved in the release process slows it up, and makes the nonperiodic simultaneous release more challenging to achieve.

4. In existing contracts with design consultants, such a Curator role following design completion is outside their typical scope. Introducing a role into a subcontractor's contract is easily achievable within the procurement timeline.

5. With scripting tools, it is possible for the Sub-contractor shop modeler to link Element Identifiers of the designers model to the Construction model, thus making it a semi-automated process for removing the approved elements from the Design Intent Trade Model.

The above process is designed “not” to remove any responsibilities or liabilities. All models and documents authored by the design consultant remain in the CDE, with their status and approvals recorded. The process is ensuring approved information is reaching the relevant project participants at the correct time. The combination of the CDE and how easy it is to engage model comparison tools, remove a lack of trust between the designer and Curator.

From model exchange and interoperability, how would this work in the real world? Following a model exchange format agreement, design intent models are exchanged on the CDE in a proprietary file format (e.g. .RVT, .DGN, .DB1), or an Open BIM Format (e.g. .IFC). If the Designer and Curator are engaging the same authoring application, there is no model trimming difficulty.

Proprietary format – Different applications: If the Curator is using a different authoring application they can:


Both of the above will enable the Curator to trim the Originators model.

Open BIM format: If the Curator is importing the IFC file format directly into their authoring application. Due to the challenge of round-tripping errors, it is ill-advised for the Curator to export the trimmed design intent model from their authoring application. Instead; engaging an IFC middleware application (such as SimpleBIM,) would allow trimming of the Design Intent Trade Model with no loss of model fidelity.

The industry is starting to understand that when working with IFC files, the use of an IFC middleware is becoming essential, as all BIM Authoring applications have their own quirks in exporting and importing IFC files.

Please provide your views below. Have you used or seen a comparable process in the past? If this appears a legitimate approach, the next process development step is projects where the construction modeling is occurring concurrently with the design stage and the As-constructed process.
Posted by Unknown at Monday, April 23, 2018