This was one of the first formally established model progression specifications and was driven by “Vico’s 5D Virtual ConstructionTM Software” and BIM services. It integrates coordination, quantities, cost planning, project scheduling, and production control. In 2010, MPS 2.0 added Aspect Classes, which add Model Design (M), Cost (C) and Time / Schedule (S) to the matrix. Vico was the first to use the term “Model Progression Specification” and “may” have originally coined the terms 4D BIM and 5D BIM.

AIA E202TM 2008 BIM Protocol Exhibit (October 2008) used the Vico’s MPS Level of Detail schema as a template to create Level of Development. Because both use the acronym LOD, this causes huge confusion, even within academic papers. Thus, the acronym; “LOD” needs to be used with caution and always use the full name and source in the opening context. 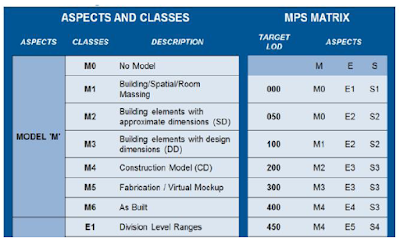 Above: Extract from MPS 3.0 showing Aspects and Classes.


Open Geospatial Consortium (OGC) - International
OGC City Geography Markup Language (CityGML) Encoding Standard  - (OGC) - First Published 2006 – superseded by Version: 2.0.0 (April 2012). CityGML is an open data model and XML-based format for the storage and exchange of virtual 3D city models. It sets out 5 Levels of Detail (LoD) for 3D geospatial models, which go from LoD0 to LoD4. LoD0 is a simplified 2D building footprint, and the scale goes right up to LoD4 which includes building internal rooms and installations. CityGML is intended to be used for modeling existing conditions and thus is not linked to project design/construction stages or model element incremental developments.


The aim of the development of CityGML is to reach a common definition of the basic entities, attributes, and relations of a 3D city model. This is especially important with respect to the cost-effective sustainable maintenance of 3D city models, allowing the reuse of the same data in different application fields. Additional information is on the open geospatial website. 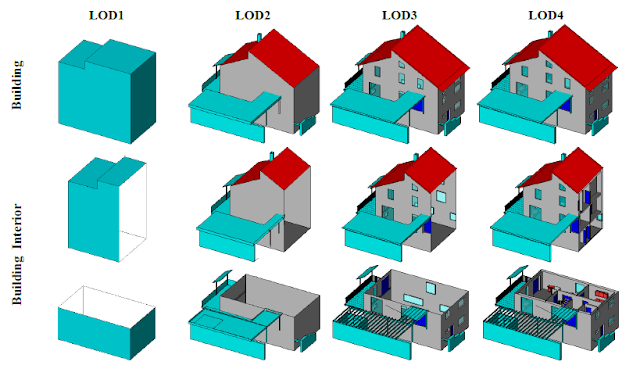 Above: Extract from OGC City Geography Markup Language (CityGML) Encoding Standard. The image does not show LoD0 (footprint only).

There is considerable ongoing work occurring with CityGML to remove ambiguity and provide better clarification in the goal to release version 3.0 in the near future.

Danish Information levels - June 2006 the Danish BIPS published the document “3D Working Method 2006” (Bips 2007). The Danish method is built upon the principle of evolving detailing. Each party will add information to the discipline model at a higher and higher level successively through the process and thus work with rising information levels within its discipline. The modeled construction objects are defined geometrically and functionally and a number of object attributes are added and specified further during the process. – The above, description is a text extract from Creating the Dutch National BIM Levels of Development – L.A.H.M. van Berlo, F. Bomhof and G. Korpershoek. 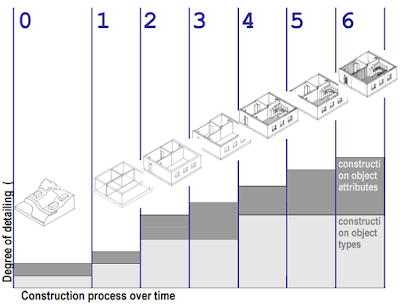 BS 1192:2007, superseded by BS 1192:2007+A2:2016. It establishes collaboration protocols between construction project members. It includes the Common Data Environment (CDE), which is a managed repository and file sharing protocol. Model sharing framework, model status and suitability, model approval and authorization, and naming conventions are also covered in the document. BS 1192 is one of the required standards to comply with the UK BIM Level 1 and BIM Level 2 deliverables. The principles in BS 1192:2007 can be used in CAD (Computer Aided Design) and/or Building Information Modeling projects.

BS 1192 will likely have a big influence on the development of ISO 19650:2. Specification for information management for the capital/delivery phase of construction projects using Building information modeling (Information here) which will be released sometime in the future. 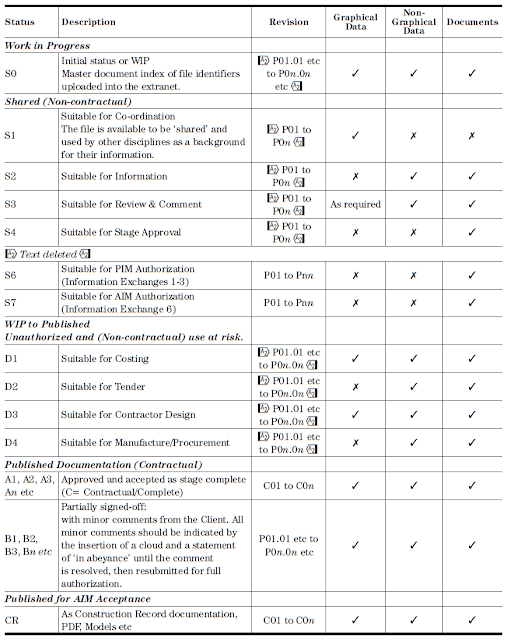 American Institute of Architects (AIA) - US

Likely the best known Model Progression Specification (MPS) and is used worldwide. This system was originally developed from Vico Software’s MPS, Level of Detail concept, but changed it to Level of Development; LOD 100, LOD 200, LOD 300, LOD 400 & LOD 500. AIA coined the term Level of Development (LOD). It has become the benchmark when it comes to comparing Model Progression Specifications schemas.

The schema uses (Level of Development) LOD 100, LOD 200 & LOD 300, but, in addition, has a grade classification suffix attribute when specifying design model elements for construction documents. It also has an additional suffix symbol for an As-Built status. The scheme does not engage LOD 400 or LOD 500.

The National Guidelines for Digital Modelling was a cutting edge document at the time of publication. Unfortunately, the Australian Construction industry did not give it the attention it deserved and is now rarely referenced. 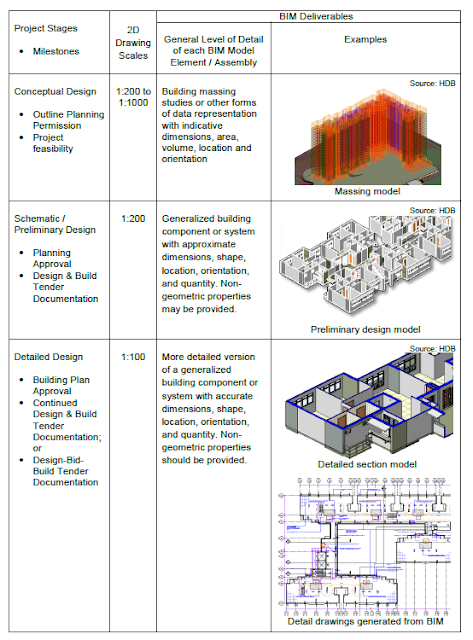 LOD Specification 2013, 2014 & 2015. A system built on top of AIA G202TM 2013. The document provides detailed graphic images, clearly defining the Level of Detail at each Level of Development - LOD 100 to 400. The framework has also added an additional progression definition of LOD 350 (sub-contractor coordination and digital layout use). The 2015 version now contains a detailed associated attribute information matrix and a model element table template (in MS Excel). Scope limited to CSI Uniformat 2010. 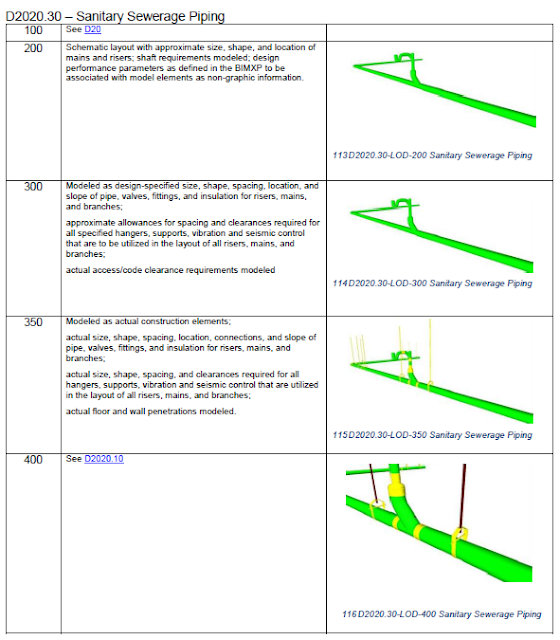 Above: Extract from the BIMForum LOD Specification 2015, showing Level of Development requirements for Sewerage Piping at LOD 200, 300, 350 and 400.

PAS 1192-2 and BS 1192:2007+A2:2016 are a requirement to achieve the UK BIM Level 2 deliverable for the UK April 4th, 2016 public sector projects. A full list of the relevant documents to achieve Level 2 BIM are on the BRE (Building Research Establishment) website – link. 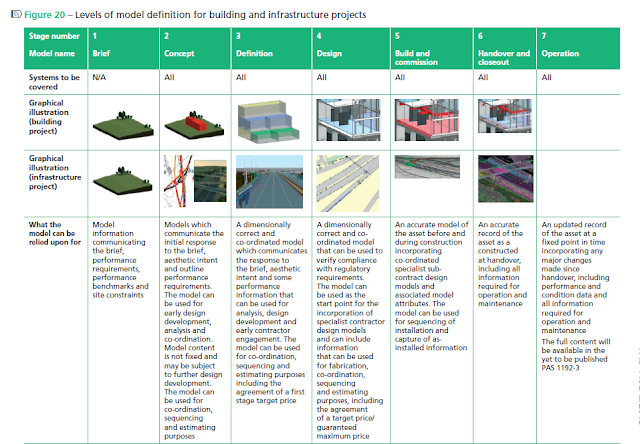 Above: Extract from PAS 1192-2:2013 Levels of Model Definition at each project stage.

BIM Toolkit 2014 to date - NBS owned by the Royal Institute of British Architects (RIBA). The toolkit contains over 5,700 construction definitions for level of detail (including graphical illustrations) and level of information in a Uniclass 2015 format. This makes it the most comprehensive Level of Detail and Level of Information resource currently available.
It is a UK Government funded project to assist in the Government Level 2 BIM Mandate (April 4th, 2016).

The BIM Toolkit provides step-by-step help to define; manage and validate responsibility for information development and delivery at each stage of the asset lifecycle. 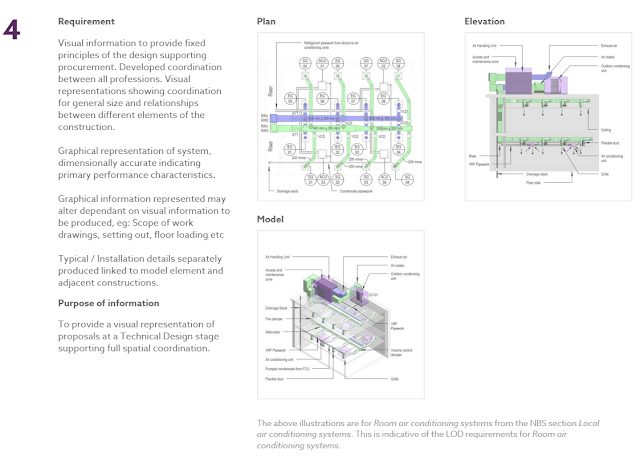 
General note: All the above documents and protocols are available for free on-line. Just follow the relevant links.

When engaging a Model Progression Specification to achieve a specific BIM enabled outcome, the contract between parties will likely need altering to accommodate this.


The AIA E203TM 2013, 301 - Building Information Modeling (BIM) Addendum and the CIC BIM Protocol (part of the UK BIM Level 2 framework) are contract addendum's, specifically suited for BIM Deliverable projects and easily accessible. All parties that are responsible for the production of Building Information Models on behalf of the Client/Employer should have the addendum incorporated into their contract/appointment. Please seek professional legal advice on the use of these addendums.
The CIOB Complex Projects Contract (for large projects) incorporates BIM deliverables directly into the main contract.

The below MPS’s are non-graphical (Structure Data) orientated specifications. They only define Level of Information.

BIM object element matrix – 2010 - is part of the VA BIM Guide.  The matrix identifies the Level of Development for non-graphical data and identifies it at LOD 100, 200, 300, 400 & 500 (in line with AIA E202TM 2008 BIM Protocol Exhibit). It uses CSI Uniformat to classify the elements and identifies COBie related data. 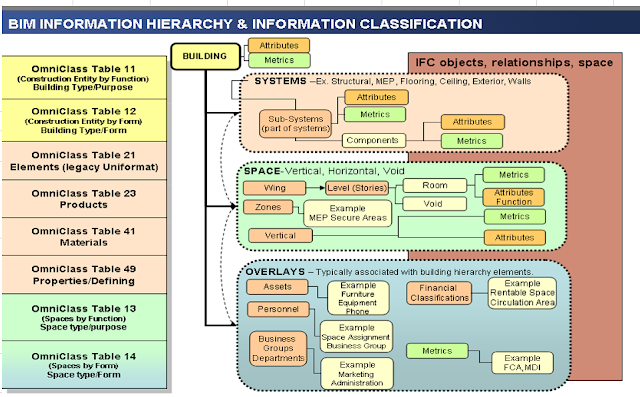 Above: Extract from the VA BIM object element matrix, showing the IFC and COBie data relationships.

Below are some noteworthy published papers on the subject in date order. If readers have published an academic noteworthy paper which focuses on Model Progression, I would be happy to list it below. Model Progression is a subject matter which requires considerable further academic research, and I encourage researchers to look into this area.

Enriching the "I" in BIM: A BIM-Specifications (BIMSpecs) Approach - E. Utiome, R. Drogemuller and M. Docherty – 2014


Noteworthy other references and opinions

Bedrick, Jim - AEC bytes Article - http://www.aecbytes.com/
Organizing the Development of a Building Information Model - 2008 (no longer available)
A Level of Development Specification for BIM Processes – 2013 (Archived – available for a fee)